It's a proven fact that climbing ladders causes brain damage and it begins on that very first rung. OSHA doesn't have a way of preventing it, so it goes untreated and even unannounced.  Therefore, ladders don't come with safety stickers cautioning the Climber, and we see the damage daily.  Of course, it's not too severe at first, but it is there and noticeable to those closest to the Climber. It sometimes begins with memory loss. With that very first step you forget what it was like on the ground, your feet on solid earth.  The Climber gets a heady sensation of power over those still on the ground, which makes sense as I hear the air gets thinner with the higher altitude. However, while it is intoxicating, it is also mind-numbing.

They tell you that when you climb not to look down and so you focus on that small flat space at the top. That's your goal and to look down would only make you dizzy.   The ladder gets narrower the higher you go and you begin to feel that squeeze. Two or three of you may have fit on that bottom rung. You could have stayed there and laughed and hung around. You were relatively safe and the fall would really only be a few inches compared to the descent from the top of the ladder.   But you're not satisfied.  You want the top.  Not me.  I know how wobbly it is at the top of ladders, even the sturdiest. Plus, I'm afraid of heights.

Furthermore, even though you said your friends could go with you, it's impossible.   Have you seen how small the top is. You can't stand on it without half your foot hanging off.  When you sit on it your feet dangle in the faces of those climbing up behind you.  Now the people you thought it would be fun to climb the ladder with you find yourself stepping on and they now know you have poor taste in shoes and a bad case of toe jam. 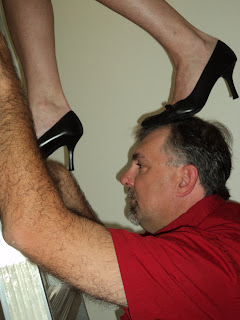 It's part of the Brain Damage Syndrome.  On the ground you knew the ladder shrunk in the higher it went. You could see that four foot base that dwindled to a platform less than a foot wide. You also knew only one person could fit but the minute your foot hit the rung logic became a foreign concept to you. Crazy ideas swirled in your head and you shouted them into reality making those on the ground shake their head at the absurdity of what you believed to be valid ideas.

You know the crazy ideas I'm referring to because like myself you've avoided that ladder and are now the witness of the idiocy that the Brain Damage People inflict on those around them.  I'm referring to things like an abundance of meetings.  "I've called this meeting to discuss the upcoming meetings that wiil be taking place after our kick ball game in the warehouse."   (Another symptom of brain damage is requiring your employees to wear business attire and then guilt them into playing sweaty games like basketball or paintball.)  Or the meeting that's held because the Ladder Climber needs to know why people aren't getting more accomplished to which the only answer is "Because you keep calling dumb ass meetings!"   The majority of meetings coming from the Ladder are redundant, repetitive and say the same thing over and over.   That's because people on the ladder like hearing themselves talk.

"Thank you for being here. Today we need to discuss the over usage of toilet paper.  Please go sparingly as it's wiping out our budget.  Now, as a reward I've bought tacos for everyone."

People who climb ladders also suddenly get a mothering instinct.  I know some are men and you think I'd say fathering, but mothers and fathers are different and as people climb ladders they become more like mothers. You see, mothers are all about nurturing and bonding.  As soon as people climb ladders they start trying to form everyone below them into a surrogate family, probably because they screwed their families up on the climb to the top.  Now, I believe in family, but not a work family.  Most co-workers I would disown if they were my family and the fathering aspect in me wants to know why the damn chores didn't get done and unlike your mother I don't care if you cry or get your feelings hurt.  What I want is for you to do your job.  Don't take time away from my real family to bond with me and if you're going to keep calling me a part of your "family" then I expect quality Christmas gifts.

It's because of Ladder Climbers that the phrase "If it's not broke don't fix it" came into play because since they have no real work to do they tinker with unnecessary things.

"I'm buying signs for our parking spaces that say 'Parking for Johnnie Fast Food Customers Only.'.  The signs are $400 each, but it'll be worth it."

"So other people won't park there."

"Oookay. You do know that we don't share a building, right?  The only people parking there are our customers anyway."

"This will make it official."

"Fine. We also need to fix the plumbing in the bathroom.  The toilet won't flush without flooding the lobby."

"Sorry, not enough money in the budget."

Ladder Climbers are easily distracted and fascinated with the new and shiny.   Those "family members" are quickly fired so that new televisions can be placed in the front lobby and the cheap metal paper clips can be replaced with multicolor plastic ones.  Loyalty begins with them to them and suddenly they're the family member whose funeral no one attends.

I've watched Undercover Boss and laughed at the CEO's who can't do the work in a company they started. Why is that? Because of the Brain Damage caused by climbing ladders. Now, they can't even make a sandwich or stack boxes.  It's sad really.  The view at the top can be majestic except they've forgotten why they climbed up there to begin with.

Ladders should be left in the garage where people can't be hurt, folded up and leaning against the wall.  It's time to protect our friend's from Brain Damage and save millions of wasted dollars and hours of squandered time.  While we're at it we should put the politicians in there as well, but that's another post.