As with all of my vacations upon checking in, the first thing I do is examine the bathroom facilities.  This is important because usually it’s the only personal time I get on a trip, and the more noises I make behind that closed door, the more alone time I receive.  Our cruise to the Bahamas was no different.  We had arrived on the boat at 12:30 only to find our rooms would not be ready until 1:30, which really confused me.  I mean, it’s not like a guest had just checked out.  The boat had been in port for several hours.  Surely, they didn’t wait until just before we boarded to remember to clean the ship.  Yet, by the look of the toilet, they had done just that.  Luckily, along with the small container of lotion and brand new Bic razor, they also provided a worn-out toilet brush. I toss the carry-ons onto the bed and tell the girls I’ll be back.  It’s been a crowded hour and I’m ready for some quiet minutes behind a locked door.  They are going to be busy hanging dresses and setting out their two suitcases stuffed with shoes, so I know I’ll be left to myself for awhile. 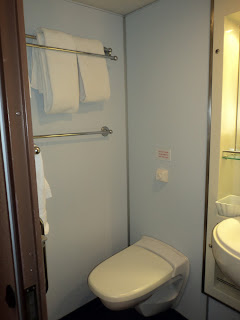 My first feeling upon entering the head was of dismay at the lack of size – of the bathroom, that is.  It’s a very tiny room crammed with toilet, sink and shower, and I do mean crammed.  I could put three of these rooms inside my walk-in closet back home.  The bathroom in my parent’s single wide trailer – pardon me, manufactured home – is even bigger.  My knees are an inch from the wall and the towel hanging directly in front of me is tickling the top of my legs.  My claustrophobia was beginning to get to me and it didn’t help that the rolling of the boat was causing me to almost slide off the pot.  At least now I had a logical excuse for my poor aim.

I usually bring a book with me when I escape, but that morning’s bacon was greasy enough to make this an emergency, so the book was left behind in the rush.  Sitting there at nature’s mercy I’m forced by boredom to either study the fuzz on the towel that I’m about to yank off of the rack or read a public service announcement door hanger that the cruise line has left hanging on the towel rack.  “Helping the Environment” I wanted a picture of this.

“Hey, someone bring me a camera!”  I call out through a cracked door.

“Robbie, you’re in the bathroom.  Don’t you have enough of those pictures?”

“I’m not taking that kind of picture.  Just bring me the camera, please.”  I wanted to capture the writing idea down before I forgot, because I suffer from Short Term Idea Loss.

“You’re not recording the aftermath of breakfast are you?  There will be better photo opportunities, I promise.”

“I’ve already played that trick on Joel.  Now, may I have the camera?” Life, for me, is a series of explanations.  However, to be fair to the girls, I do come up with some strange requests.  Of course, at the time they make sense in my head, just not when they come out of my mouth.

As I sat there browsing my reading material, I realized it for what it really was: a business ploy hidden behind a Save the Planet campaign.  They made it sound good, of course.  “At Big Boat Cruise Lines, we continue to pursue initiatives and processes that protect and preserve the environment.  Imagine the energy used every day to power your cruise.”  Obviously, the CEOs of this company have never lived with four teenagers.  They don’t realize how much energy is required to power the girls and kids.  Our power bill is half our mortgage and I sit in the dark or on the back porch.

I know the big wigs are clueless in this area because in the entire cabin there is only one electrical outlet.  Now, I realize that most cabins don’t have three girls occupying them at once, but even with only one woman in the room one socket is not enough.  Whoever drafted these rooms up didn’t know about curling irons, blow dryers, and flat irons, all the things that make women’s hair everything it wasn’t created to do.

I had brought my docking station for the iTouch, but immediately put it back in the suitcase.  There was no way I was going to be able to enjoy it.  As it was the girls getting ready to go out was a series of everyone blow drying their hair at the same time, then heating up the flat iron so they could straighten it all out before curling it again the way they wanted it curled, not the way it naturally curled.  It’s a show watching them get ready at home, but in the cabin it was like a Comedy central special. 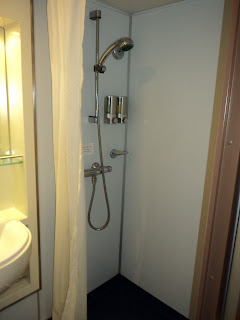 One of the things we were requested to do was hang up our towels if we were willing to use them again.  Of course, we did have the option of simply leaving them on the floor if we desired new ones, but this was greatly discouraged.  This is the first line that rang with honesty and informed me of their real motive.  “We can save the use of both laundry detergent and water with your cooperation.”  Help us save money by not using so much soap!  Of course, that also means that they didn’t have to pay someone to do the laundry, so now we’re saving the planet by putting people out of work.  I don’t know about you, but I’m not adding to the welfare crisis.  Besides, I’m not the cooperative sort.

We didn’t bring the kids with us on this cruise, which they constantly remind us of, but if we had this towel request would have caused the steward much consternation.  It would have confused our kids as well because they never hang anything up.  Towels would have been on the floor, sink, toilet, bed and probably even in one of the tiny drawers, dropped there when pulling out underwear that the girls would have had to have put away for them.  I know this because at home we have a hand towel folded and set on the counter to dry your hands with in their bathroom.  It’s a simple matter really; wash your hands, use the towel to dry your hands, and then refold the towel and set it back on the counter.  The kids seem to only grasp the first two steps.  That towel is wadded up in a different place every time I go into their bathroom, which I try never to do because, well, they’re slobs in there and it’s disgusting.  That’s another essay, however. When it came to the towels, though, I wasn’t playing along.  The steward came into our room twice a day; once to make the bed and clean up for the coming day of nautical adventure, and then again in the evening to turn down the bed – a phrase that never made sense to me – and set us up with thin mints so that we could kiss each other good night.  With the price of the cruise, I wanted clean towels every time he came to tend our room.

“What are you doing?”  The question was accompanied with the same look the girls always give me.  It’s one that tells me they just don’t understand and one I’ve become quite accustomed to.

“Putting the towels on the floor so we can get new ones,” I said as I pulled towels off their racks and dropped them onto the floor.  “Isn’t it obvious?” “But, Robbie, you haven’t even used most of those.”

“True, but they’re from this morning, which means they’re stale.”

“You better not try this at home.”  Of course I wouldn’t, because at home I’m paying for the detergent and water.  I don’t, however, pay people to do the laundry, except to feed them, and for that I also get my house cleaned and the trash taken out. At the bottom of the hanger was a “Kindly Consider” section that had such money saving ideas as “Turning off lights when leaving the room,” “Limit water consumption.  Don’t leave the faucets running,” and “Adjust the thermostat to reduce energy consumption when opening the balcony door or going ashore.”  These are practically the same phrases I scream at those who live in my house. 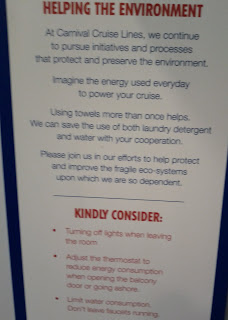 “You don’t need to run the water while you’re brushing your teeth.  Turn it off!”

“You’re half my size with less hair and yet take showers twice as long.  What are you doing in there?  Nevermind, just do it faster.” “Turn that bedroom light off!  I don’t care that you’re going back in there; you’re not in there now.”

They are all phrases spouted in order to save me money since I’m the one paying the bills.  It’s the same with the cruise lines and hotel chains, but now my mind wants my money’s worth.  I sleep better when the room is frigid and I need twenty blankets to protect me from frost bite.  When I go into Nassau, I’m leaving the music channel blaring and the porch light on.  I paid my ticket and now, I’m allowing them to foot the bill for my luxury. And, to be honest, I don’t feel guilty.  If they were really a planet saving company then they wouldn’t be trying to sell me $7.50 plastic souvenir cups with the day’s drink every time they saw me.  Of course, I bought six, but that’s not the point.  The point is that one made them money while the other cost them, which was where the line was drawn in saving the Planet.  I have that same line drawn at home.