Theme parks such as Disney World, Busch Gardens, and Sea World are a writer’s paradise, at least for gathering characters.  Even locals are at their most touristy behavior once they’ve parked their car in Goofy 13 and began that mad dash to the waiting tram to whisk them away into another dimension where fantasy trumps reality and they’re willing to pay $2.75 for a 20 ounce Diet Coke.  “It’s still cheaper than at a movie theater,” we say as we buy sodas all around. 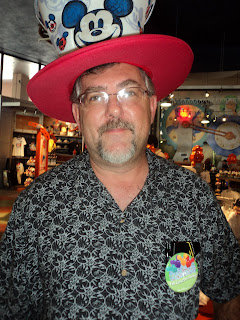 Once we enter those turnstiles that transport us from civilization to the lands of cartoon characters, we put all normal thinking aside, which explains the souvenirs most of us purchase while we are there.  I’m still not sure when I’ll ever wear that giant Mad Hatter shaped Mickey Mouse hat again, but hey, when in Fantasyland, go for it.  Justification of purchases is not required.  It’s like the day after a drunken binge.  You’ll wake up holding your head wondering, “What the hell was I thinking?” and the twenty dollar collection of Disney character soaps will go up on a shelf in the closet to be shuffled around every time you rearrange the mess that’s accumulated.

It’s also where people wear those outfits they’ve always wanted to wear, but which their spouses refuse to allow out of their homes for fear of always being labeled the wife of the man with questionable taste.  At least, I hope that’s the case.  While walking through Epcot I caught sight of a man that would have been hard-pressed to miss.  He wore a lemon yellow shirt that had a circular rainbow tie-dyed pattern around the front torso encasing the infamous Rolling Stones logo.  He also wore dark khaki shorts held up with a dress belt and dark blue sandals.  I could imagine his wife at the hotel wondering how it had gotten packed to begin with but saying, “Of course you can wear it, honey” while thanking the gods that no one they knew would ever see them.  Another set of vacation pictures to make sure never got developed.

The girls have learned to be prepared for pictures.  I can’t help it.  I love taking pictures whether their hair is brushed or not.  So, they tolerate my “Stand here” or “Look this way.”  I also take pictures of architecture, statues or landscape that I can look at years later and say, “This is cute.  What is it?”  I threw a few hundred pictures of trees and hillsides away the other month because I had no clue what it was or where it was.  “Who took this and why?”  Silence meant toss it.

My parents used to go to Walt Disney World once every three months and I have a picture of Cinderella’s Castle for every visit.  Of course, a few are at different angles and some are at night, but really, who needs twenty-five pictures of a blue and gray building.  I was thinking the same thing at Epcot when I took a picture of the giant round Spaceship Earth at the entrance.  I snapped two going in and three as I left.  Of course, this time I rationalized it away as being a digital camera, so it wasn’t like it was costing me photo developing money. 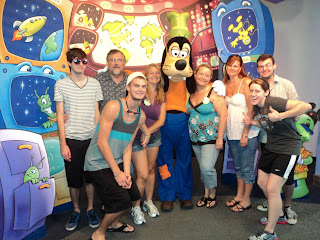 I’ve also noticed that there are two types of theme park tourist, the ones who have a systematic way of going through the rides and the ones who dart from one favorite ride to the next.  My parents were the systematic variety.  We would arrive at the Magic Kingdom as the gates opened, have breakfast at the Crystal Palace, walk down Main Street and turn left.  We’d hit each ride as we came to it, regardless of the length of line waiting to be amused by the costumed audio-animatronic dolls that we wish to believe are real people and talking birds.  By 1 o’clock we were at the Hall of Presidents where we could enjoy air conditioning and a nap while Abraham Lincoln droned on.  The only time it ever changed was when a ride was closed down for renovations, and it was always one of my favorite rides that had gotten axed.

The other type of vacationer is the one that wears me out.  They arrive at the park and the first ride they want to venture on is all the way on the other side of the park.  So, they march over the artificial streets, enjoy their ride and move on to the second adventure, which is back by the entrance.  They spend their entire day doing this, still waiting in long lines, but now adding the battle of the crowded walkways and by the end of the day they’ve paid $85 plus tax and enjoyed six rides.  I’m exhausted just writing about it.

I take after my parents, only I’m worse.  I turn one direction and leisurely move from one ride to the next, stopping along the way to look at each gift shop shelf and every plant that decorates the garden areas.  I’ll buy an over-priced drink and sip it while staring at the sweaty rushing people around me.  The lines will be the same as will the photo opportunities that Kodak so nicely points out and labels for me, but I’ll be calm and my shirt will be dry.  Well, it will unless, of course, it rains like it did on our last Epcot adventure. 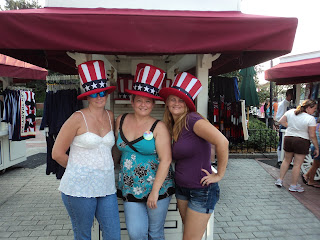 Three of our party of eight wanted to ride the Test Track at Epcot, so the other five browsed the gift shop and the sales floor of the on-site showroom.  While we were in there the skies dumped the evaporated sweat they had been saving for a week and soon we were trapped with no sign that it was letting up.  The ride was canceled due to rain and soon the other three joined us and we were trapped with no sign of clear skies.  I asked about the ponchos and balked at the $8.50 price gauge for a cheap piece of see-through plastic.  I figured Disney had called for the rain to unload the merchandise and I was not going to be extorted for my drink money I was saving for Mexico.  After a few moments debate, we decided it was only rain and would be a fun adventure, so out we went.  We had forgotten that rain was cold.  I think we had forgotten it was wet as well, but we were quickly reminded.

We made it through the downpour, laughing and screaming like little children as we realized how thin our shirts were, only to arrive in Mexico to sit in an air conditioned building.  We ordered margaritas all around and warmed back up from the inside out.

The other thing I won’t do at theme parks that I’ve seen many people do, including relations I will no longer travel with is split up and meet back at designated times.  I will never understand how that qualifies as a family vacation if the family is not together.  No, we must all stay together or I won’t be able to capture all of the embarrassing moments on film, or rather, on pixels.  Not all have to go on every ride, but we do travel and endure, I mean, enjoy, the park together.

As I said in the beginning, theme parks are great for catching characters to write about and the best ones are the ones I take with me each time I go.  However, the boys dress like that all the time, so it doesn’t really count.